Woody Pop (ウッディポップ 新人類のブロックくずし Woody Pop: Shinjinrui no Block Kuzushi), is a ball and paddle game similar to the likes of Breakout and Arkanoid It was originally released exclusively in Japan for the Sega Master System in 1987, before being given an international release on the Sega Game Gear in 1991. The Master System version of the game is designed to be used with the Paddle Control, and will not function correctly with any other controller. It would be the last game released in Japan with the Mark III branding and on a My Card. 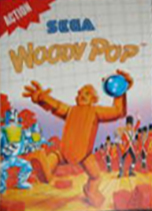