Super Boy 4 (수퍼보이 IV) is a platform game designed for the Sega Master System by Zemina. It is fourth in the series of Super Boy games, with previous games being released for the MSX (though Super Boy II was brought to the Master System). The game was only released in South Korea, and is heavily inspired by Super Mario World for the Super Nintendo Entertainment System. It is assumed that Super Boy 4 was built without license from either Sega or Nintendo. The game plays very similarly to Super Mario World, though has slightly different graphics, different music and a rather broken engine. Zemina also produced cartridges of Super Boy 4 for the Sega Mega Drive — but just like with Sega's Phantasy Star MD, this is just the Master System version in a Mega Drive case (but whether or not the game was modified in any way for the release is unknown). 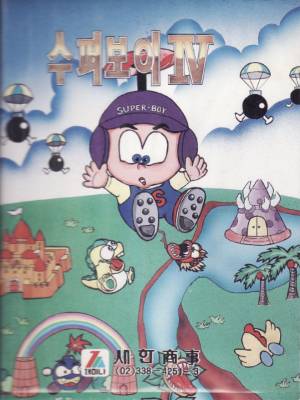